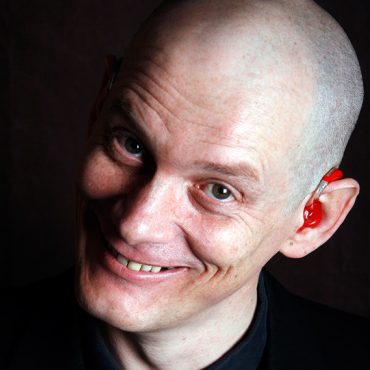 Steve Day is a truly unique comedian - warm, witty and engaging whilst dealing with the dilemmas of being a deaf man in a hearing world.

His stories of multiple children, wearing a suit and the problems caused by not knowing how words are pronounced will have audiences in raptures, and his uplifting tales of overcoming the obstacles in his path will leave crowds feeling inspired.

Steve is a favourite at many venues across the UK and abroad, and is quickly establishing himself as one of the most popular and respected acts on the circuit.

He has become a familiar voice on BBC Radio 4, contributing regular to 'You and Yours', featuring in a half-hour special of 'No Triumph, No Tragedy' and starring alongside Caroline Quentin and Patricia Routledge in 'The Sound Barrier'. Steve was also a staff writer on Radio 2's long-running 'The News Huddlines' and has appeared on numerous TV shows, most notable Channel 4's 'Natural Born Talent' and Sky's 'Abnormally Funny People'. He is currently working on a sitcom, and early treatments for an adaptation of his stage show 'A Night At The Pictures' have met with enthusiasm and excitement.

In 2005 Steve went on his first national tour of arts centres and theatres, with an updated version of his Edinburgh Fringe show 'Deaf In The Afternoon'. This tour was so successful that it went on the road again later in the same year, in total playing to over 30 venues around the UK, Denmark, Ireland and Italy. In 2006 Steve took his latest show 'A Night At The Pictures' on the road for a mini-tour, playing 10 dates around the UK to both audience and critical acclaim, with a further stand-up tour planned for 2008.

a perfect festival show the laughs come thick and fast *****

a truly lovely little show it doesn't really get much better ****

very funny, warm but without tiresome sentimentality, and intelligently life-affirming ****

effortlessly funny and refreshing to watch - his storytelling is hilarious

the best comedy often comes from real-life observations, something that Day had down to a T

a very different kind of comedy ... something which Day seems particularly proud of, and so he should be

has a self-effacing charm which endears him to audiences