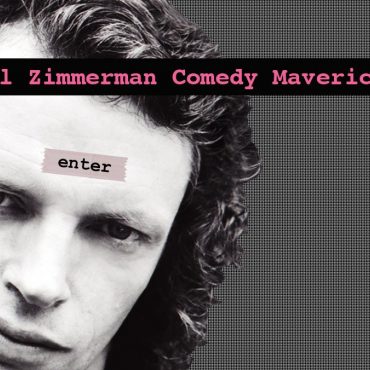 Hail him as a genius!'' - Omid Dajilli in Time Out.

''An inspired piece of physical comedy... brings a refreshing and absorbing zaniness to the stage.'' The Stage

''The only act in Edinburgh who made me physically hurt, I haven't laughed so much in years.'' punter on Chortle

''No one could doubt that this man provides an utterly unique comedic experience, producing the full gamut of reactions from total hysteria to bafflement and mild indignation. Expect the unexpected.'' www.underhand.net

Phil Zimmerman made his comedy debut in March 1999 and has played numerous clubs all over the country including The Comedy Store (London), The Red Rose, Up the Creek, Brixton Comedy Club, The Aztec, The Amused Moose, Downstairs at the Kings Head, Alexanders (Chester) and The Buzz Club (Manchester).

His oft repeated and now legendary appearance on Never Mind the Buzzcocks in 2007 earned him cult status and a whole new army of fans. His memorable performance as the The Psychotic Looking Man had Bill Bailey comparing him to a character from the film Wrong Turn, and flummoxed presenter Simon Amstell who for once was somewhat upstaged.

As an actor Zimmerman played 'Man' in the acclaimed short film Cold Little Eels (2007) which was selected for the 2008 Berlin and Edinburgh Film Festivals, and an Eco warrior in Hyppycrite ( BBC TV).

Credits also include two shows at the Edinburgh Fringe: He appeared in The Stand Up Show at the Gilded Balloon in 2001, and in 2003 devised, produced, promoted and performed Birds at the Smirnoff Underbelly.

His legendary mad pigeon act has been featured on the ITV 2 Show Gagging For It, and his performances have drawn comparisons with Charlie Chaplin and Tommy Cooper.

He once famously went on stage at a gig in Islington without uttering a word for the first six minutes, sending the whole room into hysterics entirely through the use of facial expressions. ''That was absolute genius,'' said promoter John Layne. ''That was real power up there. You don't often see a performance like that.''

He lives in a loft room in Ealing, West London, has a phobia about walking under bridges, and is the founder member of the APL. (Anti Pigeon League).