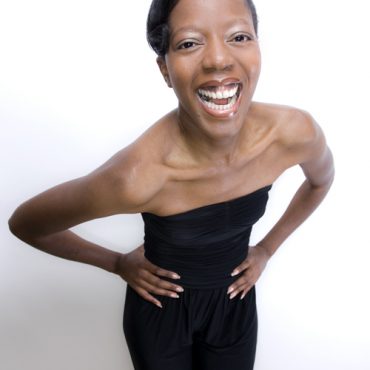 I have been performing stand-up comedy for 10 years. I also enjoy writing, researching and developing comedy and presenting ideas.

My first taste of London was with the National Youth Theatre of Great Britain as an actress, where I discovered my love of comedy and acting aged 16. I later moved down to London for a degree in Theatre Design and to continue the long walk on the theatre boards.

My Comedy topics are very wide ranging, from topical to interesting stories to talking about my past. I was adopted at birth in Africa and then moved to Scunthorpe in North Lincolnshire, I had to overcome bulling and racism before finding the confidence to stand-up. Subsequently, I am a woman on a mission!

Like all comedians, I believe that I am unique! I worked as a professional dancer for 4 years until 2000, travelling all round the world with clubs such as 'The ministry of sound' and 'Carwash', before concentrating on comedy and writing. I still model and I have landed jobs for Nivea, 'Abbey National' UK campaign and London Electricity advertisements to name a few.

I was nominated for an EMMA award in 2004 for my comedy work, and this encouraged me to diversify into other mediums such as Radio and presenting. I am currently in the process of writing a documentary about adoption and also working on my one woman show.

My act is clean, fun and quirky, I am completely at home working either as a compere or performing my act.

her northern Scunthorpe twang and honest style I really warmed to her. She was spontaneous, eccentric and a true individual unafraid of enjoying herself and being different