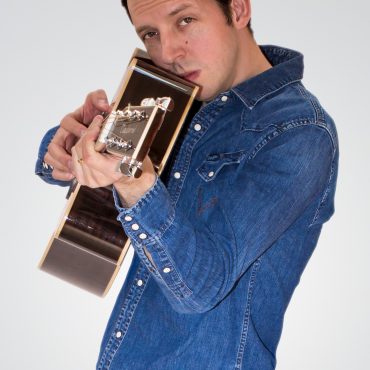 A comedic whirlwind, Jonny has a special feel-good brand of musical comedy. He is the gag slinging guitar hero - audience members don’t just leave entertained, they leave as fans.

Jonny has been performing across the UK and indeed the World, armed with an impressive arsenal of jokes and his trusty guitar. He’s a must for comedy clubs, festivals, corporate events as his crowd-pleasing set sees Jonny regularly ending his sets to standing ovations and demands of an encore. Jonny is a true professional & aims to give all of his audiences that feel good laughter factor.

Jonny’s comic talents have been sought by private clients for Corporate events, including hosting for Harley Davidson, Polydor Records and Freixenet. With experience of warming audiences up at some of the biggest shows going, including Big Brother, Jonny has developed a winning style.

Jonny is also perfect entertainment for Wedding Receptions - no one will leave disappointed, especially after one of his specially crafted songs, unique for the couple on their special day.

Jonny was a huge hit on the UK’s biggest television talent competition ‘Britain’s Got Talent’ recently, after roping in Ant and Dec for his musical extravaganza audition. After his performance, Jonny Awsum received a standing ovation from all four judges, under a shower of silver confetti and praise, which propelled him to the next round

“It was so smart, it really works for you because it makes you stand out. I like you a lot"