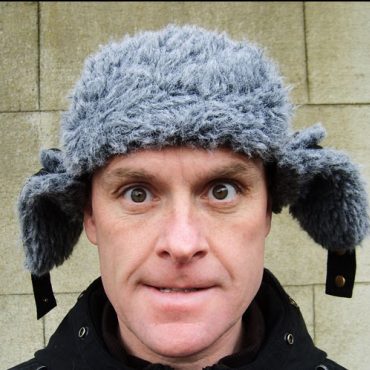 Eddy Brimson is what's known as a geezer and a damn funny one at that, but he is also a great deal more. Over the past few years, Watford boy Eddy - and you only need to hear him open his mouth and hear his Thames estuary accent to know that - has emerged as one of the most interesting, considered and thoughtful comedians on the stand-up circuit. But then the dangers of pigeonholing and stereotyping have long been core subjects of Eddy Brimson’s entertaining acts - be the brief 20-minute stand-up sets or one of his introspective Fringe shows like Kids: I Couldn't Eat A Whole One, where he explores the nature and psychology of parenthood and children and despite having any youngsters of his own and having no desire to do so.   Comedian Eddy Brimson turned his attention to television, appearing as an actor in the likes of Thin Blue Line, Casualty, Between The Lines, Silent Witness, Absolutely Fabulous and EastEnders - he was the vicious lout who turned over Frank Butcher's car lot. He also played a major role as a gang member in the HBO movie The Infiltrator. But thanks to a fit body and a completely bald head - he started shaving it at the age of 24 - he found his roles were limited: "I was always a thug, a gay guy or a Hare Krishna," Eddy says. Bored with that, Eddy Brimson tried his hand at presenting, hosting a show on Bravo called The Basement, covering topics ranging from the British Lawn Mower Grand Prix to a live hair transplant - all quality stuff. He also hosted The Brimson Brothers with (you've guessed it) his brother Dougie on Liberty Radio. It was round about this time that a friend gave him a leaflet about a course in stand-up comedy with a "resting" comedian. The rest as they say is history as Eddy Brimson has emerged to become one of the leading headline comics in British comedy and around the world. It's not all been plain sailing as a comedian. Eddy endured one 15-minute slot being heckled by the whole audience before he'd even uttered a word and performing naked to a mixture of "perverts and students" in one of several visits to Edinburgh. But generally it's been one mighty success story for Eddy Brimson has finally found his niche in life. "Once you've done it - stood up on stage and made people laugh - you've had it - and that's in a good way". Specialising in what he describes as "observational filth", Eddy Brimson is a regular at all the country's leading venues and is a long-time friend and favourite of The Comedy Club. As one of Britain's leading stand-up comedians, Eddy has recently returned from a sell-out series of shows in Australia and performing at both the Camden Fringe with his Kids show, and Edinburgh as part of the acclaimed and sold out Midnight at the Gilded Balloon show. Eddy Brimson played the first ever Altitude Festival in the French Alps in 2008 and the Sydney Cracker Festival in Australia. Eddy has also taken his comedy to such far flung places as Hong Kong, Singapore, Thailand, Dubai, Abu Dhabi and Bahrain. On television, as well as the numerous stand-up comedy shows, Eddy Brimson is one of those ubiquitous talking heads on shows like as I Predict a Riot, The Confessions of Series, 100 Worst Singles and, of course, the Britain’s Toughest Series, while appearing with Richard and Judy to ask the question "is bald sexy?" WHAT THE CRITICS SAID "Quite simply brilliant" - Sky "Eddy Brimson doesn't muck about" - Three Weeks. "The crowd loved him" - The Guardian